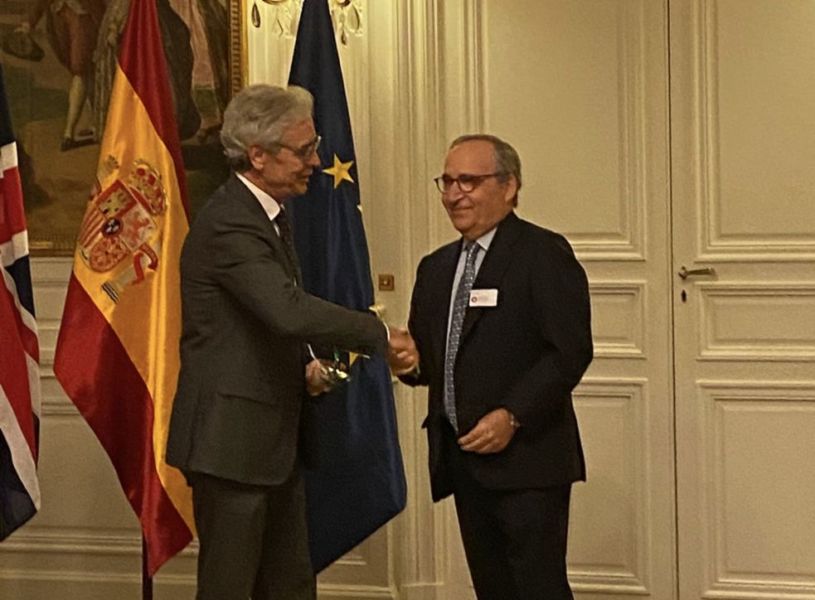 Yesterday, the Official Spanish Chamber of Commerce in the United Kingdom presented the Award to Ebro Foods, a recognition that was collected by the Chairman of the company, Antonio Hernández Callejas, at a reception that took place at the Embassy of Spain in London.

The Annual Golden Award is one of the principal corporate events organised every year by the Spanish Chamber of Commerce in the United Kingdom. This formal networking reception acknowledges the outstanding or very significant commercial activity of a Spanish company in the UK market.

“I am happy and very proud to receive this prestigious award from a country to which we have close professional and personal ties for more than 30 years,” said the Chairman of Ebro Foods, Antonio Hernández, upon receiving the award yesterday.

“It was in the late 1980s when we started our business in the UK by acquiring the rice company Joseph Heap & Sons Ltd., located in Liverpool. This operation was the origin of other investments that we have made continuously throughout these years and have allowed us to remain deeply immersed in the rice business, enjoying an important presence in the industrial business, Food Service and Retail.

Today, we have three British companies 100% integrated into the Ebro Foods Group and a turnover of £ 280 million a year. Although it is true that Brexit increases the high competitiveness of the market, our intention is to continue strengthening this presence, investing in the six production plants that we have here that employ 470 people, and we will also try to promote the development of our Tilda® brands in the Retail channel and Kohinoor® in the ethnic segment” said Mr. Hernández.

Ebro Foods is the result of a transformation that began in 2000. After an important process of expansion, internationalisation, reorganisation and divestment in those businesses in which it was not possible to achieve an international leadership position (dairy and sugar), Ebro Foods enjoys an important global position in the food sector.

In his speech, the President of the Spanish Chamber of Commerce in the United Kingdom, Eduardo Barrachina said “the reason behind this award can only be the success and determination of a company like Ebro Foods, fully committed to growth, innovation and high quality.”

“Only hard work, common sense, the right talent, research and development, professional ethics, cultural awareness, local knowledge and employees diversity can explain that a company reaches these astonishing levels of market penetration. Every company here tonight knows very well that you do not get to these levels by just being lucky. Determination and strategic thinking are essential”, explained the President of the Chamber.

For Barrachina, what is fascinating about Ebro Foods is that “it is the owner of many brands around the world that belong to the sentimental universe of millions of people”.

The event was also attended by the Spanish Ambassador to the United Kingdom, H.E. Mr. José Pascual Marco Martínez, in his first official act as Ambassador with the Chamber of Commerce.

About the Ebro Foods Group Ebro Foods is the leading Group in the Spanish food sector in terms of turnover, profits, market capitalisation and international presence, the world leader in the rice sector and the second global company in the premium dry and fresh pasta sectors.